What's on   All events
Colours of French Music 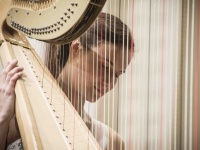 Harp recital is rarely presented on concert scene. Most often heard as a distinctive timbre in orchestral compositions the harp does not enjoy a vast solo or chamber repertoire. France is the leader in nurturing harp music composition and performance traditions. Thus, this concert will feature the harp’s collaboration with string quartet and other instruments in French music from the second half of the 19th c.–beginning of 20th c.

In past years Lithuania has been proud to be the home for a generation of young and talented harp professionals appearing in Lithuania and abroad. Joana Daunytė is one of today’s leading Lithuanian harpists. After graduating from the National M.K. Čiurlionis School of Art (teacher Daiva Šlyžienė), she studied under prof. Florence Sitruk in a special “Talent Studio”, the College of Music in Geneva and the Dutch Academy of Music in Amsterdam (prof. Erika Waardenburg), completing her education in the Norwegian Academy of Music (prof. Isbelles Perrin) in 2016.  Daunytė teaches harp at the Lithuanian Academy of music and Theatre. In 2017, she started her doctoral program (prof. I. Perrin) at the LAMT. The performer is a winner of international competitions in Spain, Russia and France, gave concerts in Amsterdam’s Concertgebouw, Luxembourg, Oslo, the Lithuanian National and Kaunas philharmonic halls, Vilnius Congress Hall and Klaipėda Concert Hall, as well as various concert venues in Switzerland, France, Ireland, Germany, the United Kingdom, Russia, the Netherlands and Spain.

Ticket prices
5, 7 Eur
SOLD OUT
Back