What's on   All events
Transfigured Night 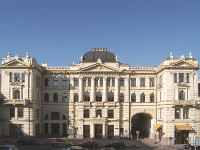 A recipient of a number of Slovenian and international awards, clarinettist Brlek has performed under the baton of K. Penderecki, M. Letonja, A. Nanut, Y. Bashmet, E. Rabakov and L. Petitgard, collaborated with Bartók, Kodály and Debussy string quartets, Moscow and German chamber orchestras, Mexican State SO, Lithuanian National SO, Cannes SO and others. Tonight he will be the soloist in Weber’s Quintet for clarinet and strings, Op. 34. Thirty years younger than Mozart, Carl Maria von Weber’s output as a composer, conductor and music critic is already permeated with romantic ideas. Employing elements of German folklore, Weber has saturated his music with the beauty of German landscape, forest and the sentiment of rural life.

The concert will open with Concerto grosso No. 1, B. 59 by Ernest Bloch, a lesser known in Lithuania but a very productive Swiss/American composer of Jewish heritage. He was greatly influenced by Richard Strauss and Debussy. Many of Bloch’s works are injected by Jewish themes. His musical output includes the opera Macbeth, five symphonies, symphonic poems, rhapsodies and large amount of religious opuses.

Arnold Schönberg, an Austrian composer and the founder of the New Viennese School, composed several versions of Verklärte Nacht (Transfigured Night) first appearing in 1899, and the one for string orchestra – in 1917.  The fact that the composer returned to the score three times shows how important it was for him. This program work was inspired by German poet Richard Dehmel’s Verklärte Nacht, an expressionist poem published in the collection Weib und Welt (Woman and World), describing a man and woman walking through a dark forest on a moonlight night.