What's on   All events
The Sound of Saqartvelo Folklore

The Sound of Saqartvelo Folklore

Organised by PI “The School of Traditional Slavic Music” 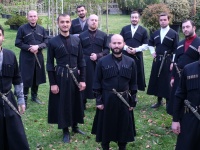 Songs from Cachetia, Guria, Samegrel and other regions of Georgia

When asked “What do sing about?” the performers of the Saqartvelo Folklore Ensemble Gorda answer without thinking – about love. They also sing about war and wedding as well as so-called city songs dating back to the 19th century. Music making is an integral part of life of Saqartvelo people thus singing comes as a natural thing to them and it is not necessary to attend a music school.

In 2010, Damian and Giorgi Gordeladze brothers, the founders of the Saqartvelo Folklore Ensemble Gorda, have captured prize in the Family Ensemble category at the National Competition organised by the Saqartvelo State Folklore Centre.

The members of the ensemble are students and graduates of G. Mtatsmindeli High School who professionally research and perform Saqartvelo folklore. Gorda brings together representatives of various regions of the country – the Guria, from where the Gordeladze brothers originate, Imereti, Kakheti and Megrelia. The ensemble’s repertoire includes Saqartvelo folk and spiritual songs, accompanied by traditional folk string instruments: panduri and chonguri.