What's on   All events
From Bach to Glass

From Bach to Glass

In response to the decisions of the Vilnius City Municipality and the Government of the Republic of Lithuania regarding the coronavirus pandemic in the world, the Lithuanian National Philharmonic Society is cancelling concert.

Attention, conductor change! Vilmantas Kaliūnas will be at the conductor's desk 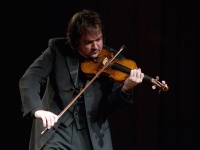 Tonight Sergej Krylov, the artistic director and conductor of the National Philharmonic Society’s another orchestra, appears as a violin soloist with the Lithuanian National Symphony Orchestra. He has chosen a rather original contemporary opus – the First Violin Concerto by Philip Glass, an American minimalist who has Lithuanian roots and has recently frequented Lithuania. The work was composed with Glass’ father in mind, despite the latter’s death some sixteen years earlier: “I wrote the piece in 1987 thinking, let me write a piece that my father would have liked [...] A very smart nice man who had no education in music whatsoever, but the kind of person who fills up concert halls.”

The maestro, conductor Vilmantas Kaliūnas will lead the Lithuanian National Symphony Orchestra in an orchestral version of Johann Sebastian Bach’s refined Passacaglia and Fugue in C minor (arranged in 1922 by Leopold Stokowski, the legendary master of the baton) and the monumental Third Symphony by Russian composer Sergei Rachmaninov. This is his penultimate work, which reveals tragic talent of the composer.