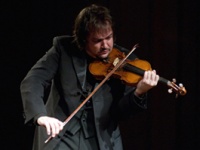 Effervescent musicianship, intense lyricism and beguiling tonal beauty belong to the qualities that have secured Sergej Krylov’s place among today’s most renowned performers.

The Russian-born violinist directs breath-taking virtuosity to reveal profound expressive insights into the works in his strikingly broad repertoire.

Among the prominent personalities with whom he has worked, Krylov’s friendship with Mstislav Rostropovich stands among the most important influences on his artistic life.

As Music Director of the Lithuanian Chamber Orchestra since 2008, Sergej Krylov loves assuming the dual role of soloist and conductor in a wide repertoire ranging from Baroque to contemporary music. Major engagements in 2018-19 include an important event at MUPA concert hall in Budapest, live recorded for TV and radio broadcast along with concerts in Italy, Poland, France Russia and Lithuania.

In addition to early recordings for Melodiya and EMI, Krylov’s discography includes two recent releases on Deutsche Grammophon: the first, a recording of Vivaldi’s The Four Seasons in the role of soloist and conductor with the Lithuanian Chamber Orchestra, the second, an album devoted to Paganini’s 24 Capricci. Both albums attracted critical plaudits.