Oginskis’ Contemporaries and The Great Teachers 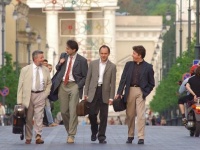 This year, 2015, we celebrate Michał Kleofas Ogiński’s 250th birth anniversary. Duke, statesman, social worker, and composer Michał Kleofas Ogiński was born in Guzów (near Warsaw, Poland) on September 25, 1765; died in Florence (Italy) on October 15, 1833. According to historian Dr. Ramunė Šmigelskytė-Stukienė, music was one of many fields this personality was active in. Ogiński is listened to and known in Belarus, Poland and Lithuania. His legacy unites several nations. Čiurlionis Quartet is one of the most committed revivers of Ogiński’s musical heritage. In May, the Quartet took a special programme Letters About Music (namesake of Ogiński’s book) to basilicas in Florence and Roma, and Auditorium del parco in L’Aquila (Italy). In September, the programme was performed in UNESCO headquarters in Paris. Initiated by the United Nations Organisation for Education, Science and Culture, celebrating its 70th anniversary this year, this concert also marked the 250th birth anniversary of Michał Kleofas Ogiński. Based on the aforementioned programme, the concert at the Museum of Applied Art in Vilnius will present a wide cultural context of the juncture of 18th – 19th centuries, resuscitate the importance of classical values, introduce to lesser known composers (Viotti, Wölfl) and revisit Ogiński’s nostalgic polonaises.